HOW MANY DAYS TO CLIMB KILIMANJARO

Many people always ask the ultimate question regarding the  HOW MANY DAYS TO CLIMB KILIMANJARO?

For an ordinary person with an average fitness level, it takes seven to nine days to reach the summit of Mount Kilimanjaro. Still, for the experienced climber, it may take from 5 days to 7 days as this depends on what route they have taken.

Kilimanjaro routes take about five to nine days on the longer routes to reach Mount Kilimanjaro Summit Uhuru peak and descend to the Finish point. The more days you spend on the mountain acclimatizing, the better your chances of getting to the top. The climbers who spend only 5 days have the lowest Summit success rate.

Climbers who spend 8 or 9 days have a much better chance of summiting. Read more about the best routes to climb Kilimanjaro.

Eco-Africa Climbing, we encourage our customers to take 7-9 day routes for the best chance of success and the lowest risk of altitude sickness.

Acclimatization Factor affecting how long it takes to climb Kilimanjaro

Kilimanjaro is a “walk-up” mountain, meaning no technical climbing is involved. How long it takes to reach the summit is primarily dictated by how well you can acclimate to the lack of oxygen.

The main reason why climbers fail to reach the summit of Kilimanjaro is simply that they have not acclimatized to the altitude.

How badly do you want to get to the summit? If you’re serious about completing the climb, acclimatization is the main factor standing in your way.

The good news is that going slow and taking your time allows your body to adapt to the lack of oxygen gradually.

The more days you spend on the mountain acclimatizing, the better your chances of reaching the top. Climbers who spend only 5 days on Kilimanjaro have the lowest success rate, while those who spend 8 or 9 days have a much better chance of standing on the Roof of Africa.

According to  The Wilderness Medical Society, the Practice Guidelines for the Prevention of Acute Altitude Illness suggested that controlling the ascent rate in terms of the number of meters gained each day is a “highly effective means of preventing altitude illness.”

A slow and steady ascent gives your body time to adjust to the altitude, and while physical fitness does not seem to affect how well you acclimatize, you’ll build in enough time for rest and recovery after the day’s hiking.

It’s challenging to get up-to-date data from the Kilimanjaro National Park, but in 2006 estimates of the success rate based on the number of days spent on the mountain were clear. At that time:

Those numbers have undoubtedly improved since then, thanks to better guides, improved gear, and a better understanding of hiking the trail successfully. But, they give you an indication of the importance of taking your time on the mountain.

Being very fit does not correlate with an increased ability to acclimatize. Being physically fit will make trekking easier reduce fatigue and stress, but it won’t help you acclimatize.

According to Dr. Hackett from the Institute for Altitude Medicine, physical fitness will give you no protection from altitude sickness. Many young, fit people will sometimes push through the discomfort, ignoring essential symptoms.

How long does it take to climb Mount Kilimanjaro on each route?

There are seven different routes you can use to climb Mount Kilimanjaro.

The shortest possible way to the summit is by the Marangu or the Umbwe Route. These routes can be completed in 5 days (but we don’t recommend it for most hikers).

You should take the longer route to give your body time to acclimatize to the altitude, but there are other considerations.

Unless you are very fit, covering the same amount of ground in a shorter time frame can increase your chances of fatigue and injury – and compromise your enjoyment of the environment.

Eco-Africa Climbing, we encourage our customers to take 7-9 day routes for the best chance of success and the lowest risk of altitude sickness.

Each route is varied in the duration of the mountain, the types of accommodation, the level of difficulty, the kind of scenery, and other factors.

The table below lists each route, sorted by the number of days usually taken on each route.

Marangu was the first route used by the climbers for Kilimanjaro climbing expeditions. It is the only route where overnight stays are in huts, and for that reason, it is often chosen by low-profile Kilimanjaro operators (there is no need to purchase expensive equipment such as tents or sleeping bags. This route has one of the lowest numbers of climbers who successfully reach Uhuru Peak.

Though the 6-day Kilimanjaro trekking option provides the “trek high – sleep low” profile, daily altitude gain is still too high for many climbers to adapt smoothly to the increasing altitudes.

Umbwe Route is a choice for hardened mountaineering experts with many climbs under their belt. The route provides the fastest, yet the steepest, way to Uhuru Peak with poor acclimatization transition.

There are no reliable success rate statistics on Umbwe route Kilimanjaro expeditions. What is known is that the majority of experienced mountaineers with prior acclimatization mainly reach Peak Uhuru, while the Umbwe summiting rate among beginners is very low.

6-day Umbwe and 7-day Umbwe climbing are the number of days allowed on this route.

Rongai Route is the only one that starts in the Northern foothills of Mount Kilimanjaro.

6-day Rongai and 7-day Rongai climbing are the number of days allowed on this route.

The Shira Route is a path approaching Kilimanjaro from the west and is nearly identical to the Lemosho route. Shira was the original route, and Lemosho is the improved variation. While Lemosho starts at Londorossi Gate and treks through the rain forest to Shira 1 Camp, the Shira route bypasses this walk by using a vehicle to transport climbers to Shira Gate, located near the Shira Ridge. On the first day on the mountain, climbers begin their hike from 11,800 feet (3,600 m) and spend their first night at the same elevation at Shira 1 Camp.

6-day Shira and 7-day Shira climbing numbers are the number of days allowed on this route.

The most popular Kilimanjaro climbing route, Machame, has over 50% of all climbers. If you choose Machame for your Kilimanjaro adventure, it will never be a mistake. This route has a great ‘walk-high sleep low trekking style, resulting in a safe acclimatization transition.

Lemosho route is one of the most scenic and hence the least crowded.

It starts on the south-western slopes of Kilimanjaro. Lemosho features nearly intimate trekking experiences with Kilimanjaro, ultimately converging with Machame in Shira 2 Camp.

Lemosho is one of the few routes having perfect ‘walk high-sleep low’ climbing throughout.

The northern circuit route is the longest and the most physically demanding on Mount Kilimanjaro; it has an excellent acclimatization transition. It is the safest climbing option with picturesque landscapes and captivating wildlife. With Lemosho Route, it is the least visited trek, which may be necessary for those seeking seclusion and privacy. Northern Circuit has an 85% record of successful climbs.

Eco-Africa Climbing, we recommend you take 7 days Machame route, 7 days Lemosho Route, and 9 Days Northern Circuit Route because they have a higher chance of acclimatization and have a good climb higher sleep lower profile. 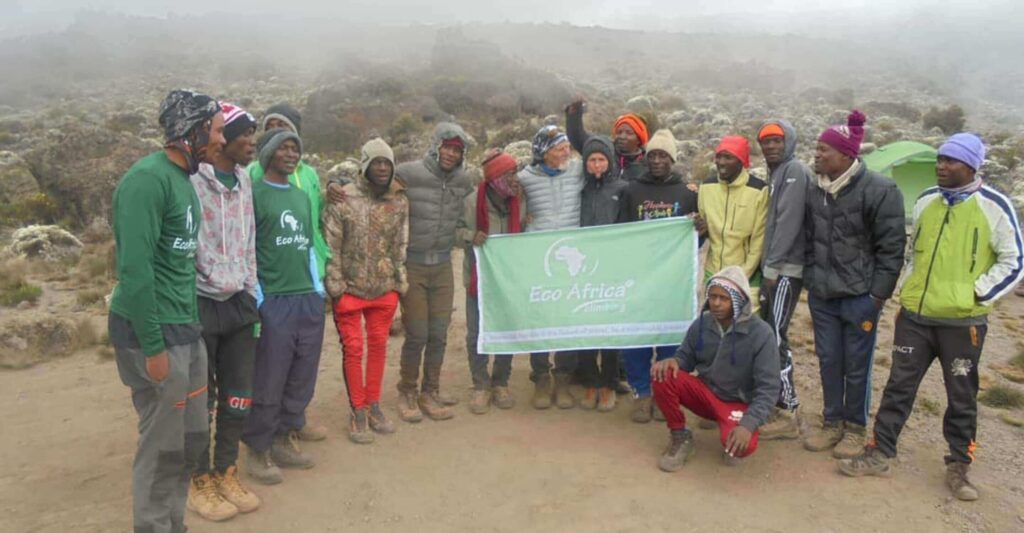 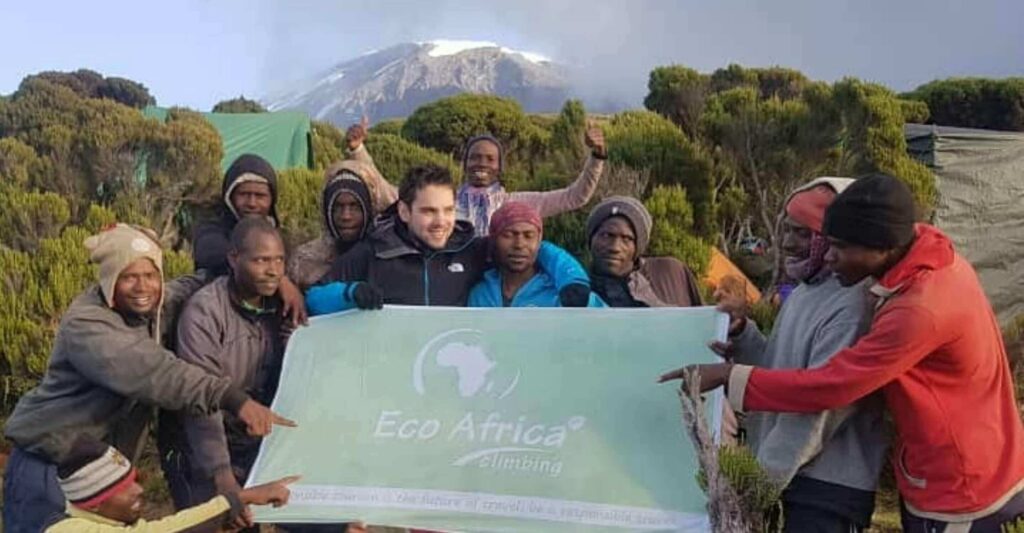 How long Does it take to descend Kilimanjaro?

It takes two days to descend Kilimanjaro from the Uhuru Peak Summit to the Finish point. The descent can take up to 5hrs to reach Camp overnight and the following day 4hrs to 6 hours, depending on the route and climber experience.

Longer Routes are a Better Choice

Many to-be people often choose 5-day or 6-day climb to reduce the price. However, because the Kilimanjaro climbing adventure is not cheap (although, in terms of trekking one of the Seven Summits, it is considerably affordable!), the price difference between a 6 or 7-day adventure is not significant. Consider instead causing unnecessary stress to your body or increasing your chances of reaching Uhuru Peak and enjoying the trek.

Taking a shorter adventure to save costs may put the whole adventure at risk. After all, the purpose of your Kilimanjaro adventure is actually to reach the Peak of Africa. Though the trek itself is a fascinating adventure, jeopardizing the sense of a lifetime achievement of reaching Uhuru Peak by avoiding extra costs does not justify the minimal savings of a single day.

Ready to choose your climb route? Or wondering when is the best time to climb Kilimanjaro?

Reach out to us to get your Kilimanjaro Quote

FOR KILIMANJARO INQUIRY AND BOOKING CLICK THE LINK BELOW

Our standard package includes the following:

The guidelines for tipping are as follows:

These tips are paid as a group rather than by each climber. For example, in a group of 5 climbers, each climber would contribute $4 – $6/day for the guide’s tip.